13 May International survey reveals 1 in 4 are anti-Semitic

This is shocking. Those who claim to follow Jesus must make this among their most premiere causes to confront and challenge. Otherwise, I would argue that they are not really even following Jesus.

Anti-Semitism remains prevalent around the world with one in four adults surveyed in a new international study expressing anti-Jewish sentiment, according to a new study released Tuesday by the Anti-Defamation League.

Read the full story at the AP

And click here to check out the ADL’s interactive map.

I was pleased to see that Iran had the lowest percentage (56%) of anti-Semitism of any Middle Eastern nation. Sadly, Armenia had a soaring 58% and South Korea 53%. 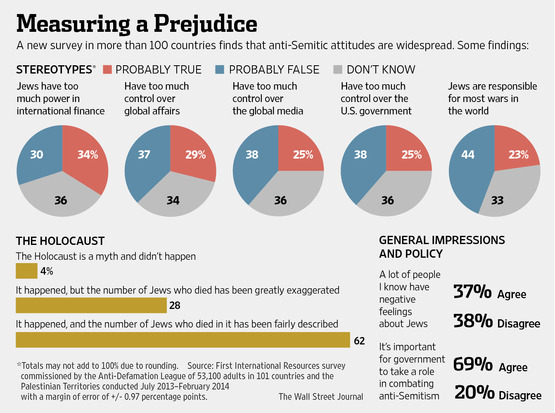