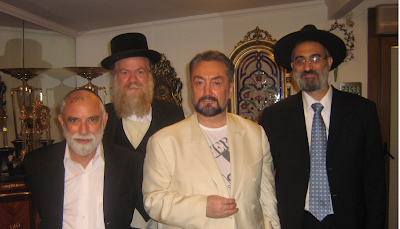 (Originally posted July 7 here) Last week, three representative Rabbis from the Israeli Sanhedrin (Jerusalem Court for Issues of Bnei Noah) traveled to Istanbul to meet with Adnan Oktar also known as Harun Yahya. A public statement was (re-)released today and may be read in full at TheSanhedrin.org If you did not see or read my recent interview with Mr. Oktar in Istanbul, then watch or read that here. For those who study and watch for the soon coming of the Messiah, this statement contains (in my opinion) some fairly dramatic signs. If you decide to comment on this post, as I have requested before, please use grace and wisdom. I have been enjoying a very friendly and warm dialogue with folks from the Sanhedrin for the past few weeks. And while I have clearly articulated to them my deep reservations, cautions and general views of Islam, I also sympathize with and understand their reasons for seeking conciliation and partnership with men like Adnan. They are just trying to serve G-d according to the best of their understanding etc. Even if I am in disagreement with the specific approach, I respect the men and honor them for their character and efforts. Initially the statement was posted on the Sanhedrin web-site but then almost immediately removed. The reason for this was simply because they decided that before officially releasing such a statement, it was best to bring the matter before the court of the Sanhedrin for a vote. This has been accomplished and acceptance of the statement has been passed by the majority. Go directly to the Sanhedrin web-site to read the statement. But one significant concluding highlight of the statement may be read below:

Out of a sense of collective responsibility for world peace and for all humanity we have found it timely to call to the World and exclaim that there is a way out for all peoples. It is etched in a call to all humanity: We are all the sons of one father, the descendants of Adam, and all humanity is but a single family. Peace among Nations will be achieved through building the House of G-d, where all peoples will serve Him, pray to Him, and offer sacrifices according to the visions of the prophets, as foreseen by King Solomon in his prayers at the dedication of the First Holy Temple. Come let us love and respect one another, and love and honor and hold our heavenly Father in awe. Let us establish a house of prayer in His name in order to worship and serve Him together, for the sake of His great compassion. He surely does not want the blood of His creations spilled, but prefers love and peace among all mankind. We pray to the Almighty Creator, that you hearken to our Call. Together – each according to his or her ability – we shall work towards the building of the House of Prayer for All Nations on the Temple Mount in peace and mutual understanding.