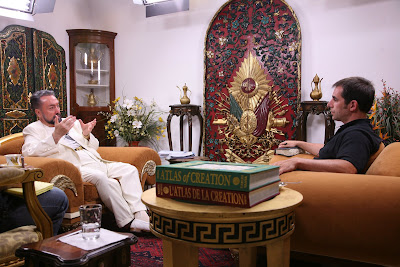 As many of you know, I recently visited Istanbul, Turkey upon the invitation of Adnan Oktar, aka Harun Yahya for a time of personal connection and discussion. And as many of you also know, Adnan is a controversial though very influential Muslim leader and intellectual who has written over three hundred books. He is very well known throughout Turkey and the larger Muslim world with literally millions of his books in circulation in numerous languages. While in Istanbul, I was treated with great care and hospitality by Adnan and his supporters. My time there was wonderful and I am very thankful to Mr. Oktar for the invitation and for his very generous hospitality.

The initial plan was that I would meet only once with Adnan but instead I was able to have two substantial meetings that lasted perhaps a total of about five hours. The first meeting was definitely a bit more interactive, but it was not filmed. In this meeting, I shared my concern for Mr. Oktar and extended to him an invitation to Christianity and to become a follower of the Jesus of the Bible. Despite my very direct and somewhat confrontational comments, Adnan was very patient and gracious, generally expressing delight at my sincere faith Adnan’s overall insistence was that Islam is at its core, peaceful and compassionate and that anything to the contrary was not true Islam. I expressed that in order to hold to this view, it required a radical reinterpretation of numerous Islamic texts and even required that he ignore vast portions of Islamic history. Instead, I explained, this deep desire for a peaceful, compassionate kingdom came from a divine deposit in his own heart but was ultimately not found in the Quran or Islam. Instead, these things would only be found in the Kingdom of Christ that all of the prophets spoke about long before Muhammad ever appeared on the scene. This yearning in Adnan’s heart is for the Jesus of the Bible, and not Islam. I was also able to present Adnan with a New Testament, a book on the resurrection by Josh McDowell and another by Pastor David Wickwire, all in Turkish. Mr. Oktar also presented me with some of his books as well.

The second meeting was filmed and you can watch it on his web-site. Click here to watch it.

Or you can read the full transcript here.

This meeting took place around 11:30 pm and went until perhaps 1:30 am. I say this because I look half dead in the video. I was running on minimal sleep. In this interview, I allowed Adnan to generally run with it. I wanted him to articulate his vision with regard to the coming of the Mahdi and his call for a Turkish Led Islamic Union. Only a small portion of the interview was edited out. Several significant issues were discussed. Surprising to me was the fact that Adnan has developed a very friendly relationship with the Israel Sanhedrin Rabbis who also are surprisingly very much in favor of this Turkish led Islamic Union. Most notable is Mr. Oktar’s friendship with Rabbi Menachem Fromen. Also of interest is Mr. Oktar’s call to rebuild the Jewish Temple. The remainder of the interview and all that was discussed is self-explanatory. I was invited to return to Istanbul, which I most certainly hope I am able to do. I would like this friendship and dialogue to continue. As I said, I was treated with the utmost of respect by Mr Oktar and his organization and I would ask that anyone who comments here make efforts to do the same. Please continue to pray for Adnan and his supporters that a revelation of the true Jesus would be extended and that their eyes would be opened to the deception that Islam represents to many very sincere Muslims who genuinely desire only to obey and serve God.