16 Feb Responding to the beheading of 21 Christians in Libya

On February 15, 2015, the Islamic State in Libya released another gruesome video of 21 Coptic Christians being beheaded on the beach in Libya. A screen shot below captures the scene moments before the men were beheaded by the Muslim mujahideen. Having watched portions of the video, my emotions are profoundly stirred. I rarely weep. But as I watched this, I wept uncontrollably.

When I wrote Islamic Antichrist 11 years ago, I wrote rather extensively on this issue, hoping to awaken the global Church to what was, and is coming. I say that not as a prophet, but simply as one who believes the words of Scripture. 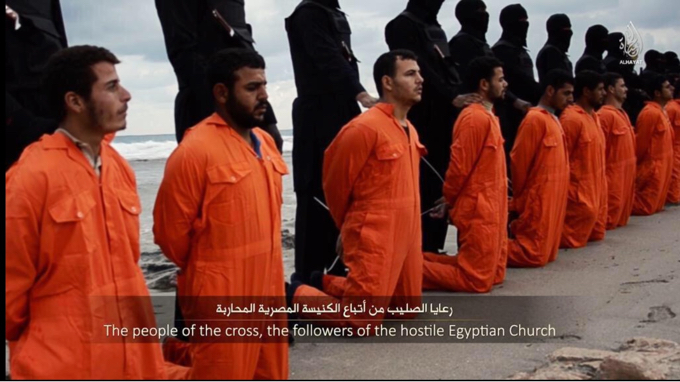 I saw thrones on which were seated those who had been given authority to judge. And I saw the souls of those who had been beheaded because of their testimony about Jesus and because of the word of God. They had not worshiped the beast or its image and had not received its mark on their foreheads or their hands. They came to life and reigned with Christ a thousand years. —Revelation 20:4

The video captures this brother below praying moments before his death. His final words were, “Ya Rab Yesua,” or in English, “Yeah, Lord Jesus.” 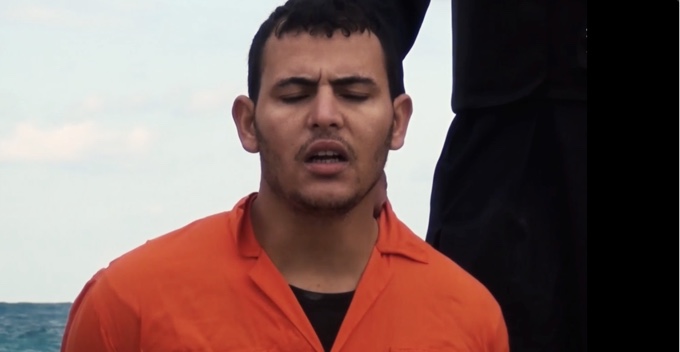 What worries me is that from the West, we see these things, and we think not in terms of joining our brothers and sisters in becoming such martyr/witnesses for Jesus (Greek: martus), but more often we respond in fear or anger or in raging for revenge. This is somewhat understandable. But the early Church had a very defined theology of martyrdom. That martyrdom embodied the highest form of witness of God. For as God is presently having mercy in this age towards His enemies, (including we who were His enemies), Jesus is sitting at the right hand of God, waiting to make His enemies His footstool. But that time is not yet. Though Jesus could call on twelve legions of angels in a moment, and consume the earth in fire with angels (as He will do), in this age, He has chosen to refrain. This refraining is out of mercy to His enemies, as He said before His execution, “Father forgive them.” Though reviled, he didn’t revile in return. Though he suffered, he didn’t threaten, but continually entrusted His soul to Him who judges justly. So in His martyrdom, he showed the mercy of God. We also, those of us who have inherited the tremendous responsibility of the last days, are also called to imitate Jesus. The Lord is patient, not wanting any to perish, but for all to repent unto eternal life. Why then do we who have received mercy not seek to be witnesses of His mercy? Why are we so often first and foremost bent on revenge? I fear that many, in the name of “righteous justice,” will fail to be the witnesses that He called us to be.

In Revelation 6:11, we see a picture of the souls of the end time martyrs under the altar of God crying out, saying, “How long oh God, until you avenge our death and judge the earth?” It is an apocalyptic picture of the Day of the Lord. They are crying out for, “When is it going to come, when is it going to be completed, oh Lord?” And God tells them to, “wait a little longer, until the full number of their fellow servants, their brothers and sisters, were killed just as they had been.” And so we have a view that one of the primary timing indicators for the Day of the Lord is the fullness of martyrs.

At the end of the age, God is going to bring to both culmination and fullness, the witness concerning His mercy to all the nations. And the martyrdom of the saints among all the nations is, and will be His primary method of displaying His mercy. This will come to a cataclysmic head under the rule of the Antichrist at the end of the age. The days are quickly approaching. Let us not merely pray, but also resolve, yeah even plan, to stand firm to the end, remaining faithful like our brothers here who have just gone on before us. To be clear, this is not to say that we do not support military action and a just response again these criminals. I am not a pacifist. But let us resist the fleshly carnal spirit of the age that yearns primarily for revenge. Let us make our highest priority the opportunity to testify, to be witnesses for Jesus.