The following post is an updated and abbreviated version of a previous post, with added diagrams at the conclusion for those who are more visually orientated. Depending on how one understands the question of two kings or three in Daniel 11:40-45, it will dramatically affect how one understands the events that precede the coming of Jesus.

Debate has swirled for roughly the past one hundred (plus) years regarding whether there are two or three kings in Daniel 40-45.

Arguments for the three king Interpretation:

At the time of the end the king of the South shall attack him; and the king of the North shall come against him like a whirlwind, with chariots, horsemen, and with many ships; and he shall enter the countries, overwhelm them, and pass through. He shall also enter the Glorious Land, and many countries shall be overthrown; but these shall escape from his hand: Edom, Moab, and the prominent people of Ammon. He shall stretch out his hand against the countries, and the land of Egypt shall not escape. He shall have power over the treasures of gold and silver, and over all the precious things of Egypt; also the Libyans and Cush shall follow at his heels. —Daniel 11:40-43

2. If the two king interpretation is true, then the Antichrist is an end times leader from a neo-Seleucid (Middle Eastern) Kingdom, which conflicts with the popular (Roman / Euro-centric) interpretations of Daniel 2 (Metallic statue), Daniel 7 (Four Beasts) and Daniel 9:26 (People of the Prince to Come).

(Thus the three king view is largely rooted in an arguably false presupposition (European Antichrist) brought to the passage.)

Survey of interpreters holding to the three king interpretation:

Arguments for the two king and against the three king interpretation:

1. The three king view violates the flow and breaks the pattern of the entire passage. (See the charts below)

2. The three king view turns the historical types of enemies (King of North and King of South) into eschatological allies against a common enemy.

4. It was Antiochus who invaded Israel and fulfilled the pattern of that which the Antichrist is to accomplish in the last days.

5. The passage only emphasizes and goes into some detail concerning the invasion and defeat of the South (Egypt), but says nothing about the defeat or invasion of the realm of the North.

8. The three king view conflicts with the universal interpretation of the early Church (see the list below).

9. The three king view is not found among interpreters until the late 19th century.

10. Despite the claims of those who argue for the three-king interpretation, the grammar of the passage in no way requires this view (cf., C.F. Keil’s comments &, J. Paul Tanner’s comments in JETS 35/3, Sept, 1992).

Survey of interpreters holding to the two-king interpretation.

The Structure of Daniel 11 Charts: 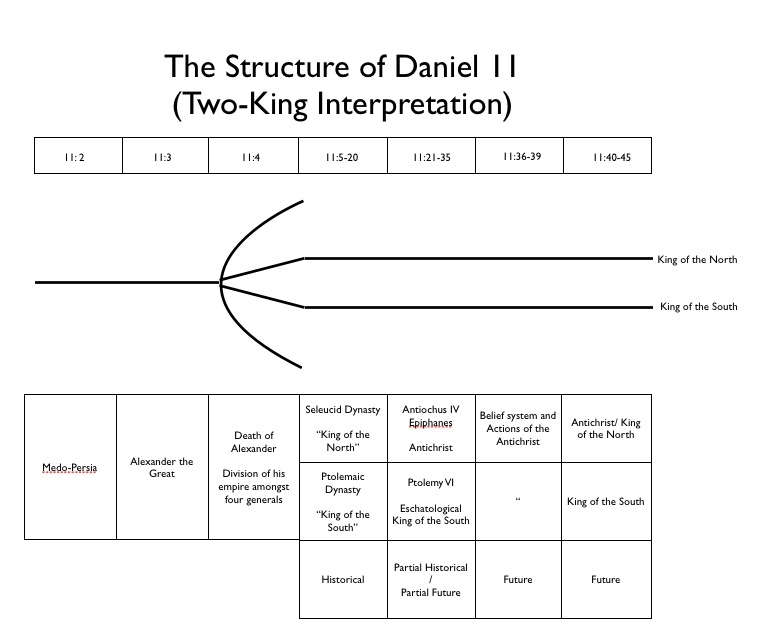 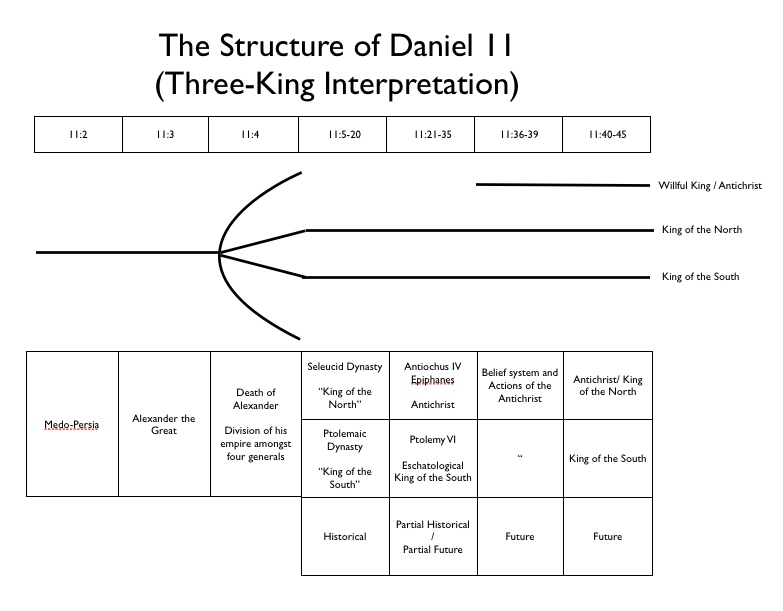