19 Jan Despite severe persecution, the revival in Iran continues!

As calls from many in the West continue at an almost rhythmic pace for military action against the nation of Iran, another rhythm, this one within that nation, continues to increase in both its speed and intensity. I am speaking of the unparalleled historical Christian revival sweeping through the ancient land of Persia. This past week, I once again had the opportunity to visit with Iran Alive Ministries (IAM) to appear as a guest on the Shabekah7 network. (The Iranian government controls six official television stations in Iran. Iran Alive Ministries beams in their own station via satellite and calls it, “Station Seven”.) Because of the courage of these Iranian believers and the many testimonies pouring out of this nation, my faith is greatly strengthened and I am once again encouraged beyond words. Flowing out of Iran on a daily basis are stories of miracles, supernatural encounters, transformed lives, and baptisms, all on a magnificent scale. This is not an exaggeration. 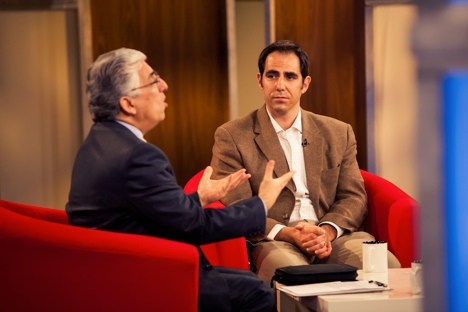 More Iranians have come to Christ in the past 30 years than in the prior 1400 years combined! The 2013 Operation World prayer manual lists the growth of Christianity in Iran as leading the entire world with approx. 20% annual growth. This means that the Christian Church in Iran is doubling every four years. Extrapolate this; present estimates place the number of Christians in Iran at around 1 million (some within the nation say it is much, much higher). At present growth rates, this would mean that in 10 short years, roughly 1 in 10 Iranians will be followers of Jesus. In twenty years, half of the nation could be Christian. Consider the changes to the region if this revival continues.

The difficulty for the Gospel in Iran of course is the virtual impossibility of sending missionaries, church planters, or trainers into Iran. Since 1979, Christian missionary organizations have been banned by the Islamic government. Christians within the nation face increasingly severe political and religious persecution if they are caught engaging in open evangelism or worship. As such, the power of satellite television, the internet, and other media are the primary vessels by which the Gospel is reaching into the nation. Clearly, there is now a window of opportunity the Western Church must recognize. No one knows how long this window will truly remain open or how long it will be before the present government becomes desperate enough to take more extreme measures. As the story of Pastor Saeed Abedini reveals, the regime is already torturing Christians and threatening them with execution.

When one meets many Iranians—both Christians and Muslims—something stands out that I feel needs to be highlighted. The Iranian people by and large are a very sweet, gentle and humble people. Because of the bellicosity of the present Islamic Iranian government, the impression often given in the Western media is that all Iranians are similarly combative and given to a belligerent form of Islamism. Nothing could be farther from the truth. When one listens to the many personal stories coming out of Iran, an almost universal factor is the hopelessness, brokenness and contrite spirits of the people. It is essential that the praying Church recognize that after 33 years of living under the oppression of the present Islamic Revolution, the Iranian people are deeply burdened, emotionally exhausted, yet spiritually hungry. The collective heart of the nation of Iran is in transition. Many Iranians are finding comfort in drugs and alcohol (Iran has the highest rate of drug addiction in the Middle East). Many others, while turning away from the empty religion of their youth, are never-the-less crying out to their creator for a response. And He is answering them.

As we continue to hear testimonies coming out of Iran, many Muslims are coming to faith through miraculous spiritual encounters, visions or dreams. Consider the following story that took place during my most recent time with Iran Alive Ministries, as just one wonderful example of how God is working among the Persian people. At the conclusion of each live broadcast, Pastor Hormuz, the host of the show, takes call-ins. This time, a woman called to share a dream, asking if we could help her understand it. In her dream, she was standing on the roof of her home with her grandson looking up at the night sky. There amidst the stars, there appeared three large clocks. As she and her grandson together gazed in wonderment at the clocks, her attention was suddenly turned to a large wedding party gathering down below. Then, as she was pondering this large celebration, a man suddenly appeared in the sky and quickly began to descend to the earth. Following this man was a very large train of people. Suddenly everyone, both those at the wedding and those with the man, together began to shout, “The Bridegroom has arrived!” The woman finished recalling her dream and asked if we might know what it could mean.

Of course, anyone who is familiar with the Bible is likely familiar with the many Scriptural references to Jesus as “the bridegroom” (Matt. 9:15; 25:1,5,6,10; Luke 5:35; John 3:29) who at the end of the age returns from Heaven (Rev. 19:11) for his people to gather them together to celebrate the “marriage supper of the lamb” (Rev. 19:9). As the woman asked what this dream could mean, and I realized that she had no idea, it was a powerful moment. The Lord is revealing Himself to the Iranian people. What are we doing to partner with Him in His work?

In the Gospel of John, chapter 4, Jesus counseled and even warned his disciples not to remain ignorant regarding the abundant harvest that was ripe for the picking, right before their eyes. Having seen with my own eyes the great harvest that the Lord has prepared, I pray that every Christian who reads this brief report will also recognize the opportunity before us and eagerly join with what God is doing in the nation of Iran through earnest prayer and generous support.

“Do you not say, ‘There are yet four months, and then comes the harvest’? Behold, I say to you, lift up your eyes and look on the fields, that they are white for harvest. Already he who reaps is receiving wages and is gathering fruit for life eternal; so that he who sows and he who reaps may rejoice together. —John 4:35-36