02 Jul God Wants to Spend Time With You

The following is a very dear and personal story to me. But it is also such a faith-building and edifying testimony that it simply had to be shared.

I’ve always been an outdoorsy kind of guy. As such, one of the more odd-habits that I developed shortly after coming to Christ at age 19 was to go for prayer walks, usually through the woods, at night. This was how I would most often conclude my day. On my walks, I would simply dialogue with the Lord in prayer, ask questions, and essentially debrief regarding the events of the day, as well as interceding for my friends and family members that didnӴ know Him yet. Another admittedly odd habit that I had was to find a special tree to climb and sit in. This was my ԰rayer-treeԮ The prayer-tree was usually the destination of my prayer walks where I could sit and as much as possible, relax, get comfortable and continue my chat with the Lord until I felt it was time to go home. The problem with trees of course is that although they can provide interesting views, they are rarely very comfortable to sit in for long periods of time. And so wherever I lived, finding just the right tree was always a challenge.

Then in 1993, I moved from Massachusetts to a city in the Mid-West to attend Bible School. The duplex that I moved into was somewhere in-between urban and suburban. It wasn’t a very woodsy area. If anything it was a slightly rougher side of town. And so I reluctantly began exploring at night, seeking out a good place nearby where I could privately engage with the lord.

To my delight and surprise, I soon discovered a nearby hospital surrounded by beautifully manicured fields of rolling hills. At night, the fields were not lit, creating a perfect amphitheatre under the stars and clouds, where I could freely worship the Lord and pray.

Upon first discovering my new secret spot, I was literally giddy with excitement. For the next hour or more, I romped around the field, worshipping and thanking God for leading me to such a special place. But then it got even better. Thatӳ when I found the tree. Sitting smack-dab right in the middle of the main field was a very unique tree. It was a medium sized willow-tree of some kind with three separate trunks. Their spacing allowed me to hop in the middle and by wedging myself against one of the trunks, walk myself up to the horizontal branches with ease. As soon as I climbed up and saw what awaited me there, I was mystified. As I looked down into notch of the branches, it was the perfect seat. Not only did it have a nicley curved bucket to sit down in, but also a sloped backrest and an arm rest on either side. But most peculiarly of all, it literally had the appearance of a giant hand. I plopped myself down in amazement. I had searched and tried out many trees, but never before had I ever found such a perfectly formed and comfortable seat! So there I sat, in awe, feeling as though I was sitting in the palm of Godӳ hand, right in the middle of my own private amphitheater under the stars. It was exactly what I had been searching for. Everything about this place seemed to have been custom-tailor-made by the Lord of Heaven and Earth just for me. This was my new spot. This night was perfect.

But the night was not over yet.

As I walked home, a mini-van suddenly pulled up next to me driven by two friends. They were both prophetically gifted and intercessory mothers-in-the-faith that I had recently come to know. ԁs soon as we saw you walking down the street, the Lord told us to stop and pray for you. Get in, they said. So we drove the short couple of blocks to my duplex and pulled into the driveway where we all began to pray.

After a few minutes, one of the women spoke up, I’m seeing a vision of you right now, Joel. I see you sitting in the branches of a tree. Does this mean anything to you?

Keeping my best poker face on, I casually replied, ummm… I guess. What else do you see?”

But there is something special about this tree. It’s as if the branches are like a hand. Yes, I see you sitting in a hand, as if it is the palm of God’s hand. Now she really had my attention. Does that mean anything to you? She asked again.

Trying to still sound casual, not wanting to let her know how amazingly meaningful this was, I informed her that I had just come from my new prayer-tree.

Then she began to prophecy: this is what the lord says to you Joel: I created this tree just for you. I want to meet you there. That is the place that I created so that you and I could spend time together. There will be difficult times ahead when it will not seem true, but I want you to know that I always have you in the very palm of my hand. Never neglect to spend time with Me and I will carry you through the days ahead.

I thanked them for praying for me, said goodbye and went into my duplex to ponder all that had just transpired. By nature I have always been a somewhat skeptical person. Even in the midst of supernatural encounters, I’ve often caught myself critically analyzing the experience. This time however, there was simply no denying the reality of what I had experienced. God had pulled the veil back and made His reality and His love for me known. My head was spinning with the implications. I thought about the tree. At the time, I was 22 years old and based on the size of the tree; I guessed that it was also roughly the same age. Far before I had chosen to become a follower of Jesus, the Lord of Heaven and Earth had already known my future. Anticipating the day that I would move half way across the country, he had begun to fashion and form a tree that He knew I would cherish.

The God that I have come to know is this passionate about meeting with His people and spending private time with them. Is it any wonder that through the ministry of Jesus, He also would retreat to a mountain or a private place to pray and spend time with the Father?

Having spent years now reaching out to the Muslim community with the gospel, I know that most orthodox Muslims will claim that the God of Creation is simply too far removed, too transcendent, too beyond us to have any personal concern for spending time with one individual out of billions.

But the God of the Bible that I have come to know has revealed himself to be a deeply emotional being with an unimaginable passion for intimacy with each and every one of us. Throughout the Bible, God reveals Himself to mankind through analogies such as Bridegroom, Husband, Father and Friend. It is only in the Bible that God is seen as the One who chooses to take on flesh and become a man in order to draw close, redeem and heal His people. Although Islam is deeply opposed to the concept of the Incarnation of God in the Messiah, the Bible clearly portrays God as the One who would go to any length to communicate His love to us, even to the point of becoming a man and suffering and dying on a cross. Although it may seem at times that He is far off or unconcerned with the difficulties in our lives, I can say with confidence that He deeply desires to be intimately involved in every aspect of your life and He truly cares about every detail.

Here in the United States, we are a people who are always searching for the secret to this-or-that. When we seek to lose weight, we will try every faddish diet there is. We will try the Atkins, the South-Beach, or the Zone diets. Some will even try the Cookie diet, the Warrior Diet, The East-Stop-Eat Diet, the Cabbage diet or a hundred other odd, abusive or just plain dumb diets, few of which ever work long-term. Rarely however does anyone simply do what we all know we need to do: Eat less calories, eat healthier whole foods and exercise consistently. The same holds true with regard to our spiritual health. So many are willing to try anything except that which is truly necessary with regard to our walk with the Lord. We will try this-or-that, we will listen to every new popular teaching that floats through the Church, but rarely will we simply do what we truly need to do: Set aside a regular, scheduled time every day and consistently take time to be alone with Him, developing a secret history with God. I encourage you, in light of the passion that God has for you, determine to make spending time with Him a priority in your life.

As I said, this story goes back to 1993. Since this time, I have spent hundreds of hours in that tree. There were even a few occasions where I fell asleep up there. Since that time, I also met and married my beautiful wife and while still living in the same city, we now live across town from my tree. A few years ago, I took my oldest daughter to the tree and told her the whole story. She had fun climbing it and sitting in Daddy’s special spot. It’s gotten a bit bigger and one of the branches that I used to use as an armrest has since died and fallen off, but the seat remains and it is just as comfortable as ever.

Just recently I took my youngest daughter to the tree and took some pictures. This story wouldn’t be complete if you couldn’t see it yourself. 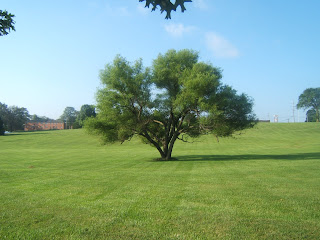 As a qualifier, I have to mention that because of death threats to my family, I told my daughter that if we were going to take pictures, she would need to disguise herself. Scanning the floor of the van for anything that she could use for a disguise, she excitedly exclaimed, I know Daddy! I can wear my swim goggles!

Good enough, I thought. And since we had just made a trip to get some healthful donuts that morning, I figured that a Krispy Kreme paper hat would be the perfect compliment to the swim goggles. So for clarity, my daughters don’t normally wear swim goggles and donut hats while sitting in trees. 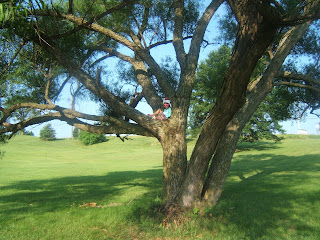 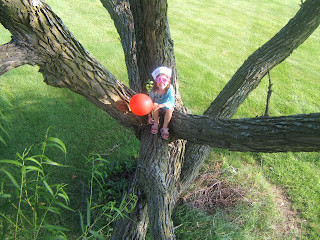